Studies on the life cycle and host range of Marteilia refringens

Marteiliosis due to Marteilia refringens occurs in Europe where it infects flat oysters, Ostrea edulis, and mussels, Mytilus edulis and M. galloprovincialis. Two types, O and M were defined on the basis of the presence or absence of a restriction profile in the ITS-1 region of the genome. Type M is more often detected in mussels and type O in flat oysters, however co-infection exists. This last event seems to be restricted to areas where the prevalence of the disease is high.

Marteilia refringens life cycle seems to involve at least one intermediate host and the copepod Paracartia grani is a good candidate since the parasite could be transmitted from infected oysters and infected mussels to healthy copepods.

During the last years, the EURL was involved in studies on (1) the molecular characterization of Marteilia refringens and (2) investigations on the life cycle of the parasite.

The EURL was recently involved in some investigations to evaluate the variability of the parasite genome in a known infected area located in South of France (Arzul et al. 2014) and in Brittany. In this context, sequencing was performed after cloning ITS-1 fragment from infected mussel and zooplancton samples. Sequencing confirmed the presence of both types M and O in mussels and zooplankton. In addition, two other sequences were obtained from one zooplankton sample. These two sequences showed 96% of homology with Marteilia cochillia.

During the last years the EURL has collaborated with colleagues from other laboratories to better characterize Marteilia refringens in different countries and host species including mussels Mytilus galloprovincialis from Slovenia (Gombac et al. 2013), M. edulis from Sweden and flat oysters Ostrea stentina from Tunisia (Elgharsalli et al. 2013).

Some of these results were published :

2 - Studies on the life cycle of the parasite.

The life cycle of Marteilia refringens is not completely known. However, the copepod Paracartia grani seems to be involved as intermediate host, at least in the ecosystem of the “claire” in France. A study performed in Delta del Ebro (Spain) showed the possible involvement of some other zooplancton species in the prasite cycle.

A study involving the EURL was carried out in Diana lagoon in Corsica, France where flat oysters and mussels cohabit as well as M. refringens. The dynamics of the infection with the parasite in both host species and in zooplancton were followed as well as the distribution of parasite stages within the different organs of infected specimens. Multiple taxa of zooplankton yielded positive results by PCR whereas only one species, the copepod Paracartia latisetosa showed positive and specific labelling by in situ hybridization (Arzul et al. 2014). Considering that Paracartia grani was not identified in zooplankton samples tested in the present study, the parasite seems to target different species of the Paracartia genus to accomplish its life cycle.

In 2013-2014, the EURL was involved in a survey carried out in Brittany. Spat of flat oysters was tested monthly regarding the presence of Marteilia refringens. Results suggest that if conditions are suitable for parasite transmission (temperature of the water over 17°C), M. refringens can infect oysters less than one-year old and multiply and develop in autumn. Prevalence decreases during wintertime. This decrease can be due to mortality of infected animals or release of parasites from infected oysters.

Some of these results have been published and were presented at international conferences: 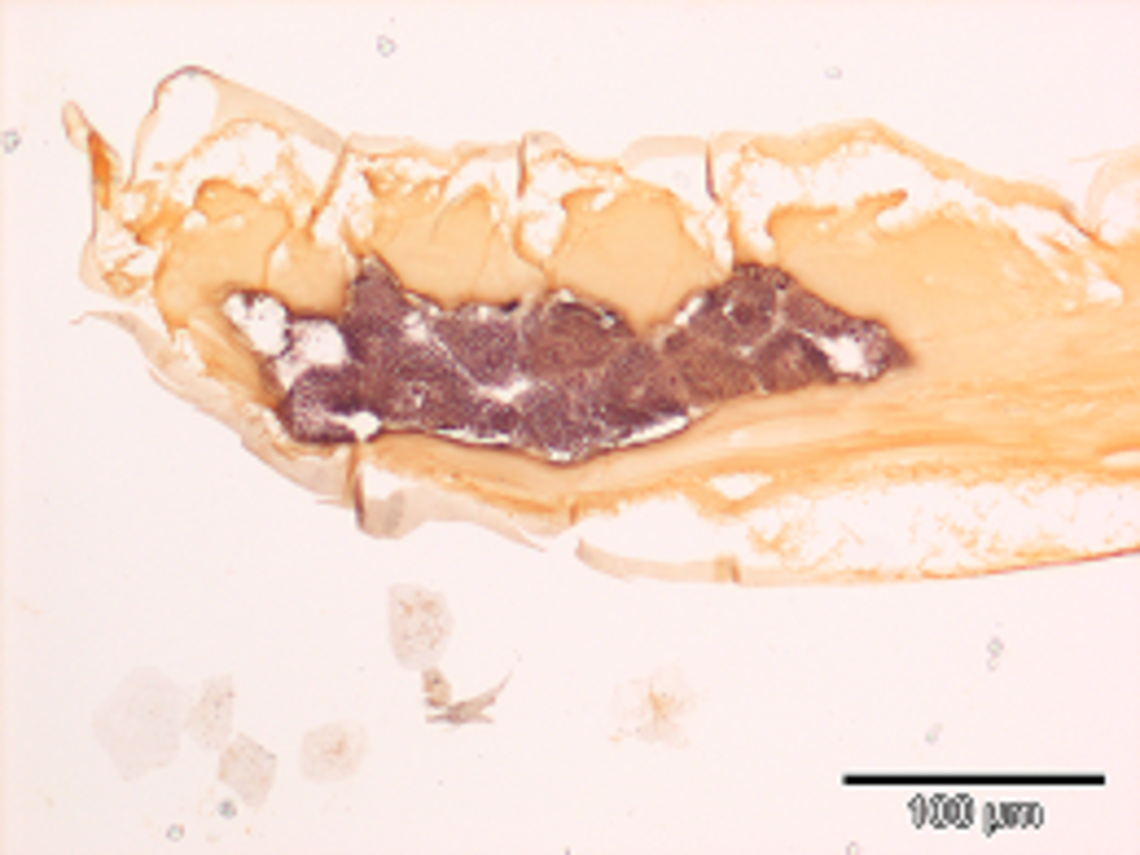 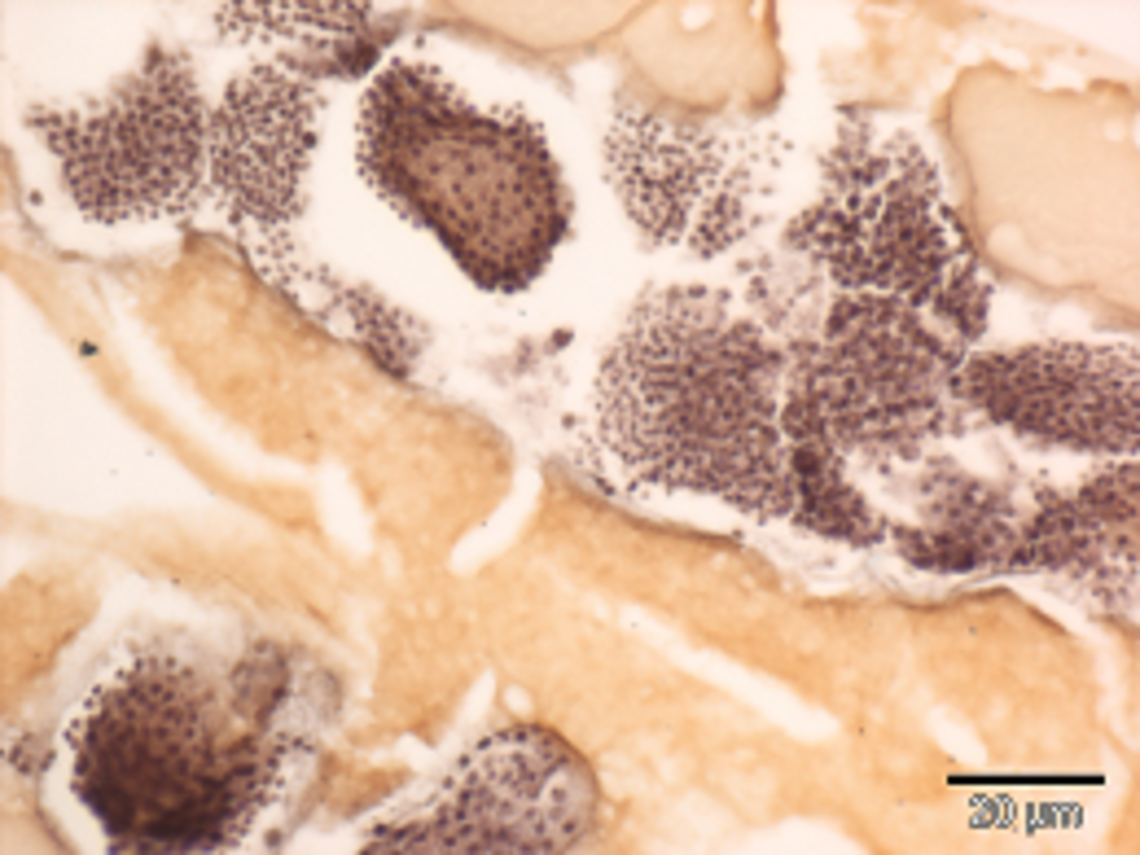 In situ hybridization analysis of copepods Paracartia latisetosa: Positive labeling is observed in small cells (1-2 μm) located in the gonadal tissue of a female copepod.